Mayor Bloomberg’s 2010 charter revision partnership with the Citizens Union showed its face Monday in the form of a comprehensive charter overview by CU panelist Douglas Muzzio, a professor at Baruch College. Here’s some of what Muzzio wrote, with our translations in italics:

Describing the current city charter, Muzzio called it “a large document (currently 356 pages), packed with organizational minutiae, much of which belongs in the Administrative Code.” The Bloomberg commission — with the help of the Citizens Union — will call for “streamlining” the charter by shifting some of its provisions to the Administrative Code. This will make it easier for the mayor and the Council to change those provisions later on, without the public scrutiny that would occur if they remained in the charter.

END_OF_DOCUMENT_TOKEN_TO_BE_REPLACED

Government 101, Lesson 1: Why Can’t the Streets Be Smoother?

Sometimes, the best ideas come while driving in heavy traffic. Although we don’t talk or text while behind the wheel, we do tend to obsess about city government. We also do that in other inappropriate situations.

Our latest episode happened while driving up Brooklyn’s Coney Island Avenue. Our tires kept on banging into one manhole depression after another. The 5-minute ride felt as if we were on an IED-pocked road in Afghanistan, not a major thoroughfare in America’s largest and most vibrant city. “Why can’t the city even pave the streets right?” we asked.

But, of course, we already knew the answer: Coney Island Avenue had been paved by a low-bid contractor, working under the oversight of private engineering consultants. They, in turn, had been supervised by civil servants who may have lacked the tools to impose useful sanctions if either the consultant or the contractor screwed up. Could efficiency improvements — which Mayor Bloomberg’s 2010 charter revision commission may try to implement — solve this? END_OF_DOCUMENT_TOKEN_TO_BE_REPLACED

What Did You Pay for Your Last Rental? 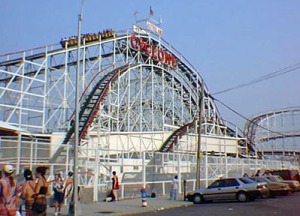 Just a brief note about City Hall’s announcement last week of its deal with Central Amusement International to develop 6.16 acres of land in Coney Island for two new amusement parks to be called “Luna Park at Coney Island” and the “Scream Zone.” Annual rent will be $100,000 for the first 10 years, with the city also expecting to receive “additional revenue derived from gross receipts from the amusement park.”

NYC’s Economic Development Corporation purchased this land in November, 2009 as part of a 6.9-acre, $95.6 million deal with Thor Equities—that’s $85.3 million prorated to the 6.16 acres being used for the parks.

We’re all for Coney Island’s revitalization, and we’re firm believers in the importance of keeping NYC a world-class tourist destination, but we’d hope that City Hall could have cut a better deal for taxpayers than this one seems to be.