Unless the details of the NYC Charter Revision Commission’s final ballot questions deviate sharply from what was in the commission’s July 9 staff report, the final tally from Wednesday’s voting session will be: mayor all, City Council and public, none.

Every one of the commission’s key decisions will ask voters to expand the mayor’s powers, or will try to draw voters to the polls to achieve this end.

How would a term limits question — the commission’s primary objective— help the mayoralty? The mayor’s office already is stronger than its legislative counterweight, the City Council. Two-term limits would distract the Council with more frequent leadership battles and freshman ramp-ups, and would hasten the day when members start preparing for post-Council employment, possibly as members of mayoral administrations. Result: A Council with less time and energy to counter a mayor when it needs to.

Isn’t the mayor subject to comparable distractions? No. Term-limited mayors don’t generally seek higher office. Mayors also tend to hit the ground running, bringing their agenda and leadership team with them. And, unlike Council neophytes, they tend to be experienced leaders themselves.

With mayoral dominance in the background, it took less than a half-hour for the Goldstein charter revision commission to settle on amending the city charter to impose two-term limits for all NYC elected officials and to prohibit the City Council from passing a local law to undo the term limits provision. It is unclear whether the commission ever considered whether the procedural restriction would survive legal challenge.

On a thornier question — how TLs should apply to today’s Council members — commission members went back and forth with vigor, ultimately voting 9 to 6 in favor of “Option 2,” which would allow all of today’s Council incumbents to complete three full terms in office. The mayor — who appointed the Goldstein panel’s members — never got mentioned in their debate.

Apart from satisfying Mike Bloomberg’s 2008 commitment to fellow-billionaire term limits advocate Ron Lauder, several of the commission’s other ballot proposals would make small, but meaningful, gains for the mayoralty, if approved by the voters on November 2.

One charter amendment would halve the number of signatures required on future nominating petitions. This would dull the edge currently enjoyed by the dominant political parties in NYC. With fewer signatures needed, independent insurgents would have an easier path to office, and political club membership could lose value, along with the clout of local and county party leadership. The charter commission may have found a way to compensate for its controversial non-starter, non-partisan elections, which, as we predicted, did not get advanced to the ballot. 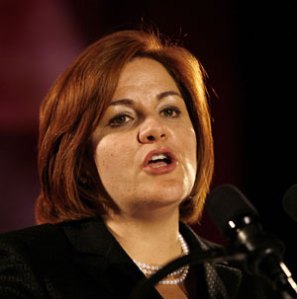 Of course, the current Council Speaker, Christine Quinn, who has mayoral ambitions of her own, may already have played this chip in a deal with Mike Bloomberg to preserve Council prerogatives such as lulus and member items.

How about the charter commission’s other ballot decisions? Some, such as a proposal to require disclosure of independent contributions to electoral campaigns, one to merge the Voter Assistance Commission into the Campaign Finance Board, and others to increase penalties for ethics violations and require mandatory ethics training, are essentially power-neutral. So is one to require graphic display of State, federal, and private environmental site information as part of the “Fair Share” process.

If the guiding principle for the 2010 charter revision commission is to preserve or enhance mayoral power, why is it bothering with these proposals?

The answer rests in the need of commission members to demonstrate that they are doing something more than carrying Mike Bloomberg’s term limits water. The commission’s advancement of such proposals also addresses its need to attract good-government supporters and other readers of the New York Times editorial pages to the polls in November.

The commission’s main work is done. On August 23rd, it will convene to approve its final full report, including the precise language of the ballot proposals it approved Wednesday.

But for voters, faced on November 2 with a restricted choice between a two-term limit proposal or the default three-term limit — but not with an option to eliminate Council term limits altogether (which would strengthen the Council and challenge the mayor’s power) — the big decision will be whether to bother coming out for the charter proposals at all.