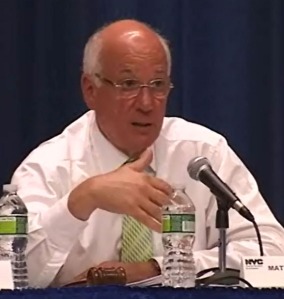 Reading from a 2003 charter document (about here’s where we lost our feed), Goldstein parsed top two’s advantages and disadvantages, expressed concern that placing top two on November’s ballot could “have a toxic effect” on the commission’s primary target (term limits), and asked his colleagues “Is the notion of voter fall-off as precipitously as we have seen the reason that we should at this particular point in time go for a very different approach than we have seen in New York City?” He called top two a “blunt instrument.” He cited a lack of agreement concerning the effect of non-partisan elections on minority voting.

To us, Goldstein’s extended soliloquy (which we subsequently viewed on the archived webcast) was his way of telling his colleagues and the audience that he thinks top two or another form of non-partisan elections is not right for this year’s ballot. After handling a couple of questions, Goldstein ended the top two discussion and opened public testimony at about 7:00 PM.

That his commission colleagues did not prolong the discussion was telling: It spoke of their acceptance that the books on government structure, Fair Share, and top two elections are closed — at least for this year. 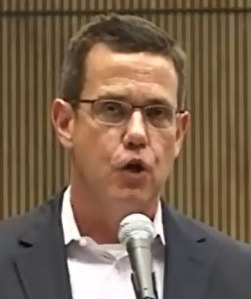 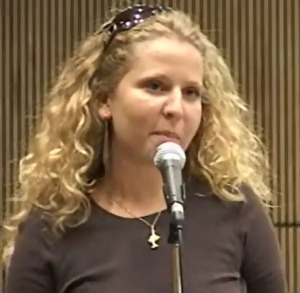 Deanna Bitteti of Common Cause

The witness who drew the most Q&A from commission members was Deanna Bitteti of Common Cause, who, when pressed by Anthony Crowell to identify a single commission position that Common Cause supported, couldn’t.

Goldstein graciously let Bitteti off the hook, but not before Crowell’s point was made.

Monday’s session did nothing to disabuse us of our cynical view of the public hearing process. Like every charter revision commission in memory, Goldstein’s 2010 panel came in with a core agenda — here, term limits — and then fished for public support for additional mayoral priorities: non-partisan elections and “efficiency improvements” such as a “reporting commission.” It also held its public hearings to appease its audience: the public, the media, good-government groups, and a few unspoiled commission members, and to provide cover for decisions already understood by its chair and staff.

Goldstein, who strikes us as a man who combines great integrity and intellect with respect for the strong-mayor form of government Michael Bloomberg exemplifies, had to understand this agenda from the outset.

One response to “Technical Difficulties”