To John Keefe, who spoke for Brooklyn Assemblyman James Brennan, the forum — and the commission itself — were “part of a cynical and opportunistic deal” that Mike Bloomberg had made in October, 2008 with billionaire term limits advocate Ron Lauder as the price for Lauder’s non-opposition to Bloomberg’s run for a third term as mayor.

Tuesday’s forum broke no new ground. After the commission’s three expert witnesses presented a huge array of factoids designed to support their biases about term limits, which can be summarized as “yes,” “no,” and “maybe,” their audience — an extremely attentive group of charter commission members— peppered them with questions. When those questioners challenged the accuracy of the experts’ presentations — and especially when such challenges came from commission vice-chair John Banks — the media got what they came for, and the commission fulfilled the first part of its agenda for the mayor who created it: satisfying his obligation to Lauder.

The “non-surprise” as the presentations, the questions, and 15 additional public speakers brought the session to the 3-hour mark, was that the members of this year’s charter revision commission feel compelled to place a term limits proposal on November’s ballot. Chancellor Goldstein confirmed that after the session. What that proposal will say, however, has not been determined.

One of the issues the charter panel will have to address is whether it has the ability to re-write the City Charter so as to prevent a future City Council from undoing the commission’s work — even if it’s endorsed by voters in November. The current charter, which permits such a reversal, enabled an incumbent Council and mayor to extend term limits from two to three for themselves and other city officials.

After the public session, we asked Chairman Matthew Goldstein whether his panel had explored using the expected November, 2010 charter referendum to send the equivalent of a home rule message to Albany to ask for “council-proof” State term limits legislation to apply to City officials. He said the commission would consider this. 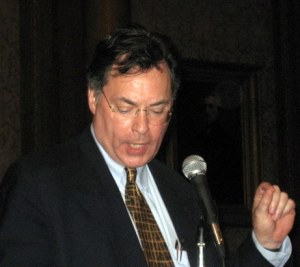 One of the 15 speakers, Noticing New York blogger Michael D. D. White, tried to discourage the commission from taking advantage of the public’s term limits passion to get voters to endorse non-partisan elections or mayoral “power grabs” such as streamlined land use procedures. But Goldstein, who later apologized to White before a group of reporters, shut him down as straying off topic. White’s testimony echoed concerns we’ve written about.

In the Kabuki-like theatre that is charter revision, the media are playing their role by providing expert coverage of term limits, while the charter revision commission staff, led by Lorna Goodman — works behind the scenes to plan a roll-out of land use procedural changes for public discussion in late June.

Ultimately, the charter revision commission will settle on a term limits formula — whether for two or three 4-year terms for each City elected official – or, as commission member Hope Cohen suggested Tuesday, for two 5-year terms, so elections can coincide with census-driven legislative redistricting.

As John Keefe reminded us, this is the price Mike Bloomberg is paying for Ron Lauder’s abstention from last November’s election campaign. Bloomberg, always an astute businessman, will try to turn it into an opportunity to get voters to endorse non-partisan elections, or, more subtly, to approve changes to ULURP or CEQR that will make it easier for billionaire developers to do business in NYC down the road.

Our hope is that the members of the 2010 NYC Charter Revision Commission — and, if not, the voters — will reject this scenario.