What Happens When a Charter School Arrives 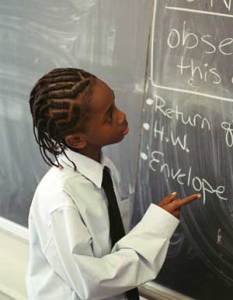 The pro-charter school argument ignores that charters can hurt overall educational progress by undermining nearby traditional public schools. Charters’ aggressive marketing efforts can force TPSs to expand their own publicity campaigns, diverting money and time that otherwise would have gone to support instruction. A charter’s arrival in a neighborhood also can demoralize a public school’s leadership and parents, who view the interloper as a competitor for space and dollar resources and community support. But it is outside the schoolhouse walls that charters may do their most lasting damage, if they create or exacerbate social divisions in the community. How this plays out depends on the neighborhood, and the quality of its traditional public school.

When a charter school is established near a poorly-performing traditional public school, the bar is set pretty low and the charter has to offer only ordinary competence to attract families away from the TPS. Sometimes, traditional schools in this situation rally their forces and improve to the point where they can survive, but frequently their leaders, teachers and parents become demoralized and find it harder to turn things around. The traditional public school shrinks or even gets closed. Its students who don’t transfer to the charter are forced to travel elsewhere.

Does the community win? Charter advocates would say “yes,” arguing that the overall effect of these changes is to improve the quality of education available to neighborhood students.

But quality of education — at least, as measured by standardized tests — is not the only outcome affected by a charter’s entry. Even in this “successful” scenario, with the loss of the traditional public school, the local community loses the social glue that such a school provides.

Where a single school had united neighbors through common experience and purpose, the arrival of a charter now splits them, by redefining play-date options and by separating parents when an abstract pro-charter-vs-anti-charter argument becomes tangible and personal. Charter school students, whose parents may tell them that they now attend a better school, could start to look down on the child left behind. Parents may do the same. And when a charter and a TPS co-locate, igniting competition for classroom space, tempers can flare and neighbors can turn into adversaries. To anyone who cherishes neighborhood cohesiveness and a “classless” society, charters can become the enemy.

Is the outcome any different when a charter moves near a high-performing traditional public school, as can be found in many an urban neighborhood? Because a charter school here may have a long way to go before it surpasses an excellent TPS, it frequently promises a different education instead of a better one. The distinctions that charters offer are as visible as possible: student uniforms, longer school days, more rigorous discipline, more homework, a classroom atmosphere “more like that in a parochial or military school,” a narrow cultural or linguistic theme, and other “style” differences that will appeal to families uncomfortable with the messy milieu of a diverse traditional public school.

Families who don’t like the charter’s distinctive style — typically, well-educated professionals — will keep their children in the traditional public school, which will survive and prosper unless a hostile school district prevents this.

Where the neighborhood TPS is a good one, the introduction of a charter doesn’t so much divide the community as it provides a stage on which neighbors get to express pre-existing differences. And here, the caste distinctions created by charters in the earlier scenario sometimes can be seen in reverse: TPS children and their parents sometimes come to view their charter counterparts as narrow, rigid, and intolerant of diversity.

Either way, the entry of a charter school into a neighborhood where most children historically have attended a traditional public school creates a battleground that didn’t exist before.

It’s not as if a new supermarket has opened up to compete with an older one. Parents and children usually don’t wear tee-shirts emblazoned with supermarket mascots; nor do they select their friends and playmates according to where their families shop. But parents and children do make such choices based on school affiliation. And when school choice gets overlaid with value judgments, positive or negative, and with a passionately-held ideological rationale, as we’ve seen accompanying the arrival of charters, the social divisions can become even wider.

In our view, it’s not too much of a stretch to say that charters, perhaps more than any other recent free-market experiment, could erode what 230 years of American democracy and the Civil Rights movement have slowly built: a near-classless society, with unprecedented social mobility for almost everyone.

Unless charters can be unambiguously shown to improve education, this may be too high a price for America to pay. So far, charters have not shown that.

2 responses to “What Happens When a Charter School Arrives”