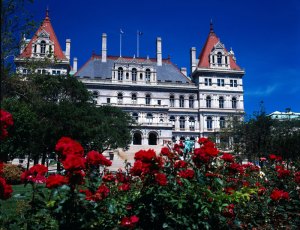 With New York and California vying for the title of the most dysfunctional state government in the U.S., it’s hard to find anyone in New York City these days who will publicly compliment Albany. Mike Bloomberg draws cheers when he blames Albany for taxing NYC’s revenues and returning less than the city’s fair share. City public school equitable funding advocates agree with him, not without reason. Charter school operators and supporters bristle at Albany’s failure to lift the state’s 200-school cap. Atlantic Yards opponents chafe at Albany’s strong-arm development tactics. State aid to the Big Apple is reduced and city jobs are threatened because Albany’s budget deficit is gigantic. These days, Albany is an easy target.

Indeed, to most of us outside the State Capital’s inner circle (why does Dante spring so easily to mind?), Albany’s repetitive scandals, its endless back-and-forth over State Senate leadership, the Governor’s increasingly common gaffes, and the Assembly’s institutional impenetrability all seem to prove that the critics are right: New York State government simply doesn’t work the way it should.

Sure, there’s plenty to be disgruntled about, but if you fall into the growing group of New Yorkers who think our mayor sometimes exceeds his mandate, Albany also can seem like a supportive uncle: one who occasionally cautions City Hall to slow down and listen to its constituents. To these New Yorkers, especially the many who live in Brooklyn, Queens and The Bronx, Albany may merit blame for encumbering the redevelopment of the World Trade Center site, but Albany also deserves praise for forcing City Hall to re-think a speculative plan to develop Manhattan’s West Side as the venue for the 2012 Olympics. Similarly, to the relief of many outside of Manhattan, Albany also was why Mr. Bloomberg had to withdraw his unpopular congestion pricing plan. City Hall may sometimes wish Albany would go away, but not all New Yorkers agree.

These New Yorkers may be recognizing that Albany sometimes fills a gap at the east end of the Second Floor of City Hall. For reasons too complex to address in this article, the City Council seldom disagrees with the city’s chief executive. So common is concord between the mayor and the Council on major issues that when the Council rejected Mayor Bloomberg’s plan to develop the Kingsbridge Armory Mall in late 2009, some Council members told journalists it was the first such refusal they could recall during the entire Bloomberg administration.

With a too-loyal opposition in City Hall, Albany sometimes sees a need to step in to play the moderating role that the City Council does not. When this happens, editorial writers loyal to the mayor have tended to call Albany dysfunctional, rather than the more neutral term, disagreeable—their way of saying City Hall was right and Albany was wrong. But in the end, the distinction between dysfunctional and disagreeable doesn’t really matter. Either way, it is City Hall that is getting dissed.