Tag Archives: Board of Estimate 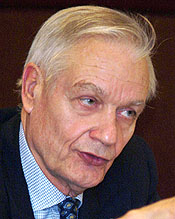 The senior panelists agreed that Mayor Bloomberg’s 2010 commission has no choice but to address term limits (although they couldn’t agree on how), that New York’s strong mayoralty must continue, and that the borough presidents’ offices should be strengthened. What they didn’t agree on — term limits, their impact on minority voting, the fate of the public advocate, and non-partisan elections — provided some lively back-and-forth. END_OF_DOCUMENT_TOKEN_TO_BE_REPLACED