What’s the Deal at DCAS? 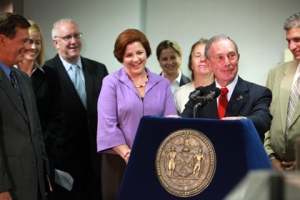 Martha K. Hirst has headed up DCAS, the city agency responsible for leasing office space, since Michael Bloomberg took office.  So when one of our readers suggested we look at a recent Daily News article that said that new Bloomberg deputy mayor and efficiency expert Stephen Goldsmith had identified 10,000 unused office spaces rented by City Hall, and was proposing getting rid of them to save bucks, we eventually Googled on Martha’s name.

We discovered that Hirst was out, replaced by Acting Commissioner Donald P. Brosen, with only a brief announcement by City Hall on July 14.

Here’s how the News reported the press conference, which Hirst attended:

“Mayor Bloomberg says his new point man for running the city has found at least $500 million worth of waste and inefficiency – from unused office space to uncollected debts.”

“’The quality of customer service can go up at the same time we save taxpayer dollars,’ said Goldsmith, who said the city is paying for 10,000 desks with no employees at them.”

Apart from “what happened to Martha Hirst,” we have several other questions for City Hall:

(1) Why did the pre-Goldsmith Bloomberg administration rent 10,000 more office spaces than it needed?

(2) Will City Hall now be able to break these leases?

(3) If it can break them, what will an extra 10,000 unrented office spaces do to New York’s commercial real estate market?

(4) Why is the mainstream press so soft on Mike Bloomberg when he spins belated recognition of his administration’s mistakes as examples of “delivering better and more efficient government services?”