So effectively counterbalanced was CU’s top-two advocacy by the opposition from floor speakers that the evening felt scripted, almost as if some political strategist had said “we’ll satisfy CU that we’re listening to them, but we’ll give enough opponents a chance to speak that CU will realize that putting non-partisan elections on the ballot this year would fail. And then the mayor won’t owe anything to them or to the Independence Party.” 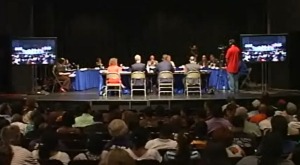 The Charter Commission at Brooklyn College

Notably, Independence Party leader Lenora Fulani — whose members have clamored for non-partisan elections at previous hearings — was in attendance Monday night, but didn’t speak, leaving the chore of publicly supporting the CU proposal to her party’s counsel, Harry Kresky.

Opponents of top-two, ranging from Public Advocate Bill di Blasio and Manhattan BP Scott Stringer to ACORN’s Bertha Lewis, NYPIRG’s Gene Russianoff (atypically splitting with his allies at CU), and CUNY professor John Mollenkopf, as well as 15 other folks, chanted the same chorus to Matthew Goldstein and his commission members: Place top-two elections on November’s ballot and you’ll lose. And you’ll probably get shot down by the Justice Department under Section 5 of the Voting Rights Act of 1965 anyway.

Goldstein didn’t seem to need much convincing. As if setting the stage for the top-two opponents, he stressed that the commission’s ballot propositions would have to pass the test of “will we have a high probability of success.” Monday’s testimony may have provided him with the cover he needs to convince his colleagues — and the mayor — that top-two elections will fail that test.

Although several of Goldstein’s co-commissioners voiced mild support for top-two elections, only one — Anthony Perez Casino of The Bronx — persisted, at least until Mollenkopf disabused him of the belief that top-two would treat political parties more gently than ordinary non-partisan elections do. The difference: Non-partisan elections obscure party affiliations, while top-two reveal them. But, as Mollenkopf explained to Cassino, under either definition, members of a political party would not get a chance to select a party candidate.

No less scripted than top-two — but more compelling to this observer — was testimony urging the Goldstein commission to improve the city’s 197a planning process and restore compliance with the fair share provisions of the 1989 charter. These seemingly-solid protections against concentration of environmental hazards in any one community had been eviscerated by City Planning Commission rule-making shortly after the 1989 charter was enacted. And, as speaker after speaker stated, minorities and the poor, especially in Brooklyn’s Sunset Park community, had shouldered too much of the city’s burden. 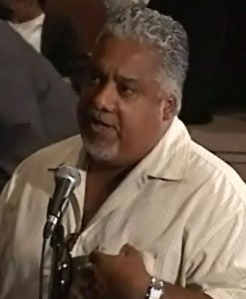 One speaker, Eddie Bautista of the New York Environmental Justice Alliance, complained to Goldstein that the commission had ignored his several rounds of previous testimony — and, according to the commission’s July 9 staff report, the fair share issue itself. When Bautista asked for a meeting with Goldstein’s staff, Goldstein committed to set it up.

Three comments worthy of mention came during the evening: Goldstein expects his commission to be judged by history (he spoke about how the 2010 commission is “standing on the shoulders of giants” and then said he’d like to believe that “we have very big shoulders here”), commission member Hope Cohen complained that “the press has not adequately covered us,” and Cohen later took issue with an unfortunate emphasis in the July 9 staff report and the Citizens Union document that non-partisan or top-two elections would be an issue for the Democratic Party. Citing Staten Island, where Republicans dominate, Cohen said the issue was with all political parties, not just the Democrats.