Past practice suggests that charter revision chair Matthew Goldstein will use the commission’s June 24 forum on Land Use to signal what his panel will focus on as it moves into summer.

We — and others — have criticized the NYC Charter Revision Commission’s calendar, which delays publication of land use proposals until July. This is too late for most community boards to draw residents to public hearings to comment on any proposed changes. The commission must submit its final proposals to the City Clerk by Labor Day to get them on November’s ballot.

One City Hall insider we spoke with last week tried to allay our concerns. He commented that when the charter revision commission chose not to schedule its Land Use forum until the end of June, it was signaling that it doesn’t really expect to grapple this year with ULURP or CEQR, which govern the city’s land use and environmental review processes. 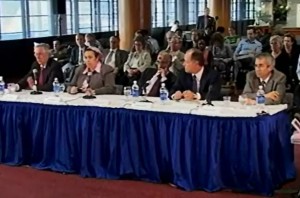 According to him, the 2010 commission will deal with one big ticket item — term limits — and one or two “minor,” “uncontroversial” changes: perhaps a requirement that the mayor’s executive budget be broken into detailed units of appropriation (right now, for example, the executive budget shows the entire $19.4 billion Department of Education expense budget on two-and-a-half pages); and maybe a change in how borough presidents and City Council members appoint community board members (currently, Council members nominate half the members of each community board; they have suggested that they should directly appoint these).

Another source said “it’s not going to happen. The only way the borough presidents will give up any community board appointments will be if they get guaranteed budgets of their own and some additional powers.”

There’s still time for this to play out, especially if land use, non-partisan elections, changes in the mayor’s power to estimate revenues, and restructuring of key panels dominated by mayoral appointees don’t get most of the commission’s attention. Commission sources already have hinted that they’ve ruled out eliminating community boards and  borough presidents this year.

If other changes are in the offing, they may include some that Council speaker Christine Quinn proposed on June 10: granting the Council the power to advise and consent to the mayor’s choice to head up the city’s Law Department; giving the Civilian Complaint Review Board “the power and budget to prosecute its own cases and send its findings to the Police Commissioner for final determination;” and restructuring the Conflict of Interest Board so it includes Council appointees and enjoys “some degree of budget independence.”

As for the rest? Here’s chairman Goldstein’s language at the sparsely-attended June 16 Public Integrity forum at City College:

“We’ve already made the decision that term limits will be an issue that the commission wants to bring forward for consideration. But in anticipation that there are many other issues that the commission would need to look at, because the mayor has asked us to do a top-to-bottom review of the charter, we are in the process of developing many treatises and other items — written research that will be made available for future consideration — depending upon how the mayor wishes to address what happens after this commission sunsets.”

To us, this sounds as if Goldstein is setting the stage to tell us what will be on the commission’s summer hearing agenda, and what will not — something executive director Lorna Goodman corroborated at a June 21 charter revision forum sponsored by the Queens Civic Congress. “At this point, we have enough information to decide what is possible to put on the ballot in November,” Goodman said, adding that “the commission will make a decision.”

But even if the 2010 charter revision commission limits its preliminary proposals to term limits and one or two “uncontroversial” minor changes, its accelerated calendar will prevent the public — and community boards — from coming together to consider those changes and develop an institutional consensus around them.

One public hearing in each borough during the summer just doesn’t cut it. The commission’s schedule will ensure that most people won’t participate, leaving the opportunity to comment to a few individuals, lobbyists, trade groups, unions, and funded civics such as the Citizens Unions — and not to most community boards.

The comments the commission gets from individuals run the risk of being disjointed and repetitive, suggesting that even the most dedicated commission members may lose interest after the third or fourth iteration of the same argument.

But it’s too late to re-think the timetable. All we can do is hope that the 2010 charter revision commission does the right thing, satisfies the mayor’s 2008 commitment to term limits advocate Ron Lauder, and avoids formulating any substantive changes to government’s structure — and especially to land use — while New Yorkers aren’t around to pay attention.

Our guess: Chairman Goldstein will reveal the commission’s intent to narrow the agenda on June 24. Otherwise, no one should be surprised if voters reject the commission’s recommendations in November. Not even the mayor.