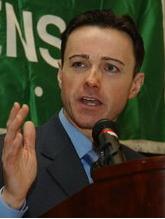 One surprise from Monday morning’s webcast meeting of the 2010 NYC Charter Revision Commission at the Tweed Courthouse was that Staten Island commission member Stephen J. Fiala emerged as a hard-liner with respect to the commission’s tight schedule. Here’s what happened:

Chairman Matthew Goldstein asked executive director Lorna Goodman to describe the five “issues forums” that the commission will convene starting later this month. These, she said, will center on land use; term limits, voter participation, including consideration of non-partisan elections; “balance of powers,” including the roles of the borough presidents and the community boards; and fiscal integrity.

Goldstein then turned to Fiala to read the resolution by which the commission would formally adopt the commission’s calendar, including another round of public hearings to be held during the summer. After those, he said, the commission will have to make a “pivotal decision” prior to September 2 as to  “whether to cull a subset of issues” to be presented on November’s ballot.

Fiala’s resolution essentially echoed Goodman’s presentation,  mentioning that the commission had solicited input from the heads of City departments and their personnel, and had heard widespread expressions of public interest in term limits, voter reform, land use, the “structure of the City of New York,” budget, and government integrity, and transparency.

After Goldstein seconded the resolution, commission members Carlo Scissura, Hope Cohen, Anthony Cassino and Ernest Hart stressed the need for openness and extensive outreach, and raised questions about the limitations of public hearings during July and August, which Goldstein admitted is “a sleepy time.”

Fiala, Richmond County Clerk and a member of the 2004-05 charter commission, defended the schedule, saying  that “the outreach efforts of this commission are unprecedented,” and drew on his Richmond juror-assignment experience to remind the public that — as with jury duty — it has a responsibility to participate no matter when hearings are held.

Fiala then proposed amending his resolution to embody Scissura’s suggestion that the public be given a chance to comment after expert testimony is received during the issues forums.

After Goldstein rejected as unnecessary a suggestion by Father Joseph M. McShane to specify that the commission “weigh at each stage whether to go forward,” he called the question. The resolution passed unanimously.

We didn’t hear any mention of the future of the Public Advocate’s position or of mayoral succession, but those hot-button subjects could easily be included in one or more of the upcoming issues forums.

One response to “Charter Revision: Just Like Jury Duty”