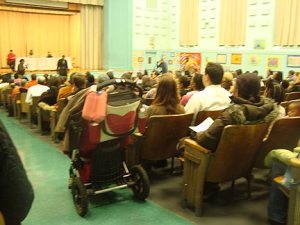 Charter schools have become a crucible for New York’s gentrification battles. The latest episode in this war is described in an excellent neighborhood blog called Hawthorne Street. Earlier this week, at P.S. 92 on Parkside Avenue in Brooklyn’s Prospect Lefferts Gardens, a couple of dozen predominantly white supporters of the Lefferts Gardens Charter School squared off verbally against mostly-Black P.S. 92 loyalists who were outraged at the Department of Education’s plan to give some of their school’s space to the new charter school. (Full disclosure: P.S. 92 is our editor’s alma mater.)

One prospective charter parent who attended the meeting, Vernalisa Joseph, called the scene “extremely emotional.” She said the conflict between the two groups of adults was witnessed by their impressionable children, who had been brought along for lack of child care.  “It was very sad. They weren’t always just thinking about the kids.”

The comments attached to the Hawthorne Street story are a microcosm of the national charter school controversy: The comment writers are civil and their views sincere. Some, like charter parents everywhere, simply view the new schools as a way for them to take an extra step for their children. Others bemoan Tweed’s top-down management style:  “The one substantial criticism I’ve heard of the local schools is that parents have no voice, and I wouldn’t want my kid to go to a place like that,” one commenter writes.

But none of the comments, even by people loyal to P.S. 92 and the parents who have committed their time and energy to improving it, articulates the gut issue beneath the surface:  the charter advocates are implicitly criticizing P.S. 92 parents by rejecting the educational choice those parents made for their children.

It is an object lesson for education policy makers. They, like charter school parents, need to realize that when they argue that charters are superior to traditional schools, they aren’t just criticizing the traditional schools. They’re also questioning the wisdom, the judgment and the commitment of the traditional public school parents. No matter how unintended, it’s an insult. If those parents react passionately when the Department of Education forces them to accommodate a new charter school, no one should be surprised.

Updated 11:35 am: Hawthorne Street reports that the Department of Education has approved the siting of the Lefferts Gardens Charter School in the P.S. 92 building. We will follow this story as it develops.